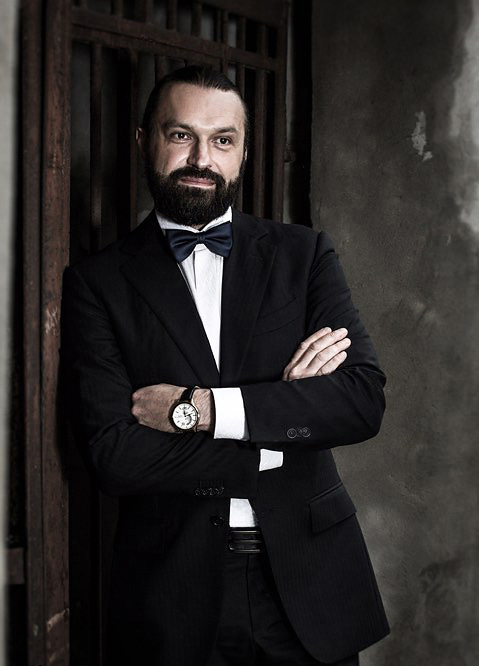 He graduated from high school in Vilnius, Lithuania. In 1991, he graduated from an art school of Lithuanian Ministry of Culture and Science where he acquired education in the fields of engraving, etching, drawing, sculpture, ceramics, art history and did his thesis on book illustration (engraving).

At the same time, he worked on illustrating children’s books along with his father, Victor Shatunov.
Their first collaborative book together, titled „The house that was built by Jack“, was released in 1989 and was put into circulation three times in a row by the publisher called „Malysh“. The number of released copies exceeded 3 000 000. Valerij continues working with his father on creating illustrations for children’s books which are published in more than 10 countries around the world. In total, the number of books released into circulation summed up to 20 000 000 copies.

In 1995, Valerij had fully mastered the techniques of airbrushing, which was widely used in book illustrations.

Since the year of 1995, all the works by Valerij Viktorovich Shatunov are protected by “LADGA”, an organisation protecting copyrights and intellectual property.
https://www.latga.lt/autoriai/A4.html
This protection is valid all around the world. Moreover, Valerij Viktorovich Shatunov is included in the international registry of authors IFFRO (International Federation Reproduction Right Organisation)

Since the year of 1997, he has worked as a technical editor at the„Polina“ Publishing House. He continues his work with book series like „Guliver’s travels“, „The four musicians of Bremen“, „The three musketeers“, „Raven Mahausen“ and many more.

The number of books published together amounts to over 90.

In 1998 Valerij graduated from a computer science/coding school and acquired a degree in computer graphics.

Since the year of 1999, he uses computers to improve hand drawn illustrations digitally.

1999: Valerij started studying the technology and peculiarities behind animation under the guidance of a famous Lithuanian animator Ilja Bereznickij.

Since the year of 1999, he knows how to use Wacom tablet for creating computer graphics perfectly well.

In 2001, a Lithuanian animation studio “Vilanima” sent Valerij to study the graphic styles of making backgrounds for a full-length animated series “Children of Fire” to a studio in Ukraine, Kiev called “BORISFEN-LIUTES” (Ukrainian-French corporation) After this, his status was upgraded to head of the department of animated film backgrounds. At the time, the complexity of these backgrounds was rated 9/10. Style – gouache + pastel. Adobe Photoshop.
Samples of work: http://shatunov.lt/portfolio/multi-series-borisfen-lioness-background-creation/

2002: simultaneously Valerij began his works with various advertising projects. He was responsible for creation proprietary graphic styles, logos and unique graphic elements, external advertising and maps for private companies.
Since the year of 2002 Valerij worked as a graphic designer for one of the world’s leading global advertising agencies „AGECOM“ – „LOWEAGE“ (Lithuania)
Together with „LOWEAGE“, the agency received a number of awards at two international contests: “Golden Hummer” and „Adrenalin“. They received 2 golden arrows, 3 silver arrows, 5 bronze arrows there. The works are not only published on the territory of Lithuania, Latvia, Estonia, but also in Sweden, Belarus, Poland, Russia, etc.. His works include collaboration with world-wide brands like: Unilever, JTI, BMW, Land Rover, Rover, Subaru, Mini, Cosmopolitan, Pernod Ricard, BerlinChemie, Lukoil, SAS, HRG, Fashion, Hediard Wallark, etc.).
Samples of work: http://shatunov.lt/portfolio/advertisement-graphics/

2005: launched his own advertising agency „Vizualas“
Currently Valerij Shatunov and his agency carry out a wide range of orders in various countries around the world (Lithuania, Latvia, Estonia, Russia, Belarus, Germany, Poland, Norway, England, Georgia, etc.) for various advertising agencies, corporate and private clients. Valerij continues working in the agency as a freelance designer. He uses various computer graphics programs like Photoshop, CorelDRAW, Painter, and others (if any of these softwares are required).
Samples of work: http://www.vizual.lt/darbai/grafinis-dizainas/

2008: with the help of a polymer compound base, Valerij has developed new decorative lights using programmable LED special effects line called “STARSTONE”. The new technology has taken several different directions: one of them is the ability to create insoluble ice. Thanks to this technology, it has become possible to construct buildings made of ice with special lights installed into them on beaches.
https://youtu.be/TCXV6Jb2Zjc

2010 – 2013: Valery Shatunov, together with his commercial partner Igor Bezuglov, developed concepts, ideas and infrastructures for a new project called “CONTI LAND” – city of entertainment. Valerij fully prepared it for implementation. The project’s cost summed up to 500 million euros, and was meant to occupy a total area of more than 100 hectares in a district called Sirvintos in Vilnius, Lithuania. This city would have had 22 different blocks (1 hectare each) representing a region of the world with all its cultural features – restaurants, boutiques, clubs, theaters, shows, museums, productions, national holidays and traditions. Valerij gathered all the necessary information about these regions which meant to be integrated into “CONTI LAND”. Not only was he responsible for implementation of the project but also became the leader of a strong administrative team. Unfortunately, the project was suspended in 2013 due to the economic crisis in Europe.

2015: Valery started creating a completely new brand called “Glowing Fantasy”, which was subsequently associated with ultraviolet lighting and fluorescent paints, as well as with light-storage technologies. All of this is developed and put together to be available for children’s use.
Another brand called “Lord of Baskerville” was created (not only for children, but for adolescents and adults) – as a result. Clothes, accessories, paintings, and many more interesting features were prepared for production.

2013-2016: A project called CATAMARAN is created. It is a three-story catamaran with a total area of 500 m2. Valery developed the external design and the layout of the interior. He also was responsible for the research of technologies that could help implement this project (project uses solar panels and electric motors; principles of modular assembly from finished structures are applied).

2014-2016: together with his partner, Valery was engaged in the design and concept development of a multifunctional titanium transformer cargo bike. Uses: transporting heavy loads, driving adults and up to 2 children at a time, mobile cafe) SCARABTRIKE – SCARABTITANBIKE.
https://youtu.be/ukSuWu0SciA

2016: Valery and his partner launched a cyber sport group called “Drones Agency”.
https://www.facebook.com/dronesagency/videos/569409503241337/
With ERSA’s (European Rotor Sport Association) support race tracks for drones was created in Lithuania for the very first time. On September 9, 2016 drones’ races and participation of international pilots was certified and qualified to be held in Lithuania for the very first time.
https://youtu.be/5Jr2K4_EMJI/ https://www.facebook.com/dronesagency/videos/620253714823582/
Due to success of these races, the very first Baltic team was created. It was called “BALTIC TEAM”, which included representatives of Lithuania, Latvia and Finland. In 2016, this team took 3rd place at the “ERSA European Championship 2016” in Ibiza. Valery was engaged not to only create visual designs for the entire project, but also to compose technical and engineering structures of the project.

2016: Valery Shatunov launched a new advertising production agency “YPSILON”, planned to be renamed to YPSILON GROUP, an advertising agency with a full range of services in one place for corporate clients. http://ypsilon.lt

May 9, 2016: The “Factum” agency acknowledges Valerij’s works and puts them in their Lithuanian record database. These works had the largest number of images in one work. In fact, he had 4 different images in one painting. Initially, Valery submitted 3 paintings for commission’s consideration. http://www.rekordai.lt/?psl=rekordas&md=2&mid=4257&rkid=1179&rid=1046.
In the future it is planned to submit these projects to GUINNESS WORLD RECORDS. The entire project is called “Glowing Fantasy”. It had a very long story behind it, which began in 1991. Valerij worked on this project for over 27 years and within that period managed to finish 14 various paintings. It is forecasted the project will be internationally recognized and attract a lot of interest due to the fact of having more than five different directions. These directions will be implemented through Crowdfunding platforms. The world will also see a book with unique reading and viewing technologies; however, information about that is hidden for commercial reasons.

2017: Valery launches a new online project for children – “Bedtime Story” found at: http://www.valerytales.com. The main purpose of this project is to reassure your child before putting him to bed. An opportunity to create a series of short cartoons for children and put them on social media seemed extremely realistic.

2017: Together with a foam factory, Valerijus launches a new unique project “HAPCHICO” – Happy Children Company. These are foam toys for paint coloring. For the very first time, video tutorials with Valerij’s latest methodology on animation technology was used. These lessons can be streamed live on YouTube. The project includes many new video lessons and opportunities for educating children as well as planning out charity events for them.
https://www.youtube.com/watch?v=lRy9QkhnG4Q
https://www.facebook.com/hapchico/videos/1930389303899429/

2017: Valery and his partners collaborated in the creation of the Lithuanian Professional Boxing Federation where he was engaged in the advertising and the visual parts of the project. Not long after, Valerij is assigned as the director of the press service. On September 9, 2017, the very first International Professional Boxing Championship was held in Lithuania with live broadcasts in more than 15 countries of the world.
https://youtu.be/xee3Um894FU

2018: Together with decorator Zhanetta Volodkovich, Valery implements a unique project – the installation of glowing clouds and an imitation of “an air battle in the night” in two, four-story glass atriums located at the LOOP HOTEL. All prepared at the aviation school in Lithuania. Interior lighting was implemented into twenty, enormous two-meter clouds. In addition, special equipment allowed them to fully imitate a stormy sky. The exact copies of these old aircrafts were equipped with local backlight making them look exactly like the real thing. Two moons were also created from polymer resin and fiberglass with the addition of all the craters. The moons’ diameter was over 80 cm and had an internal light installation. All this was done over all 4 floors of the hotel.
https://youtu.be/TokgS8nb6DA / https://youtu.be/j8LNJIepk1I / https://youtu.be/csCK8Czd8Hc

2018: Valerij, together with a sculptor Elena Klement, participated in the creation of the first chocolate sculpture museum in Lithuania. Valerij acted as a consultant and decorated the walls and ceilings of the museum with light effects.
https://youtu.be/zlSkSgOv_-s / https://youtu.be/55rJn9qANDI
On October 14, 2018 in Trakai, an exhibition of Valerij’s three unique inverted paintings took place at the opening of the Chocolate Sculpture Museum. This event was thrived in the press and in the media.
https://youtu.be/jQE_4g-uM_k

2018 Valerijus, who works for YPSILON advertising agency, was most interested in the creation and development of the new Glowing Fantasy brand. Participating in world exhibitions in Frankfurt and Bologna, he met people from all over the world who were interested in this project and until 2019 was the first to introduce educational books, puzzles, clothes, accessories, stationery. Through a crowdfunding platform www.IDIOGOGO.com, he launched the very first part of the project called «Smart magical glowing toy pillow for colouring».
https://glowingfantasy.com

From the start of 2019, Valerij began writing his first magical tales and stories for children, which will be included in one of the author’s books with illustrations from the picture “Invert”. The book is expected to be published in 2021.

June 8, 2019: Valerij presented his 7 reversible paintings at a grand event called “GORED”, Grand Hotel Kempinski. The “Illusion Show” demonstrated there has been widely covered by the press and media.
https://www.youtube.com/watch?v=Bq86BHIdSaI

2019: Valerij is preparing the launch of “GlowingFantasy.com”, which is scheduled to unfold in early 2020. The project includes: glowing children’s toys, glowing books, puzzles, glowing clothes, backpacks, drawing accessories, glowing carpets, animated drawing lessons and much more. All of this is already being prepared for implementation. https://glowingfantasy.com